Report on the 2017 International Cruise Season in Sept-Îles

Report on the 2017 International Cruise Season in Sept-Îles 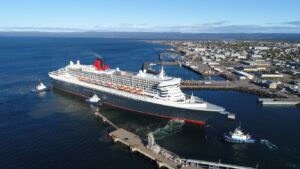 SEPT-ÎLES, October 17, 2017 – The international cruise season in Sept-Îles was capped, on October 2, by an impromptu visit from the RMS Queen Mary 2. With pig roasts, chainsaw wood sculpting, traditional Innu and folk dancing, Innu tea time, artisans, folk singers, bonfires and marshmallows, a classic car show, and a recycled metal sculpture exhibition, there was plenty to see and do this year at the cruise ship dock.

The season got underway early in the summer with the arrival of two ships: the Seven Seas Navigator (Regent Seven Seas Cruises) and the MS Insignia (Oceania Cruises). In September, the MS Marco Polo (Cruise & Maritime Voyages) and the MS Saga Sapphire returned to Sept-Îles for a third and second time, respectively.

In July, the Port of Sept-Îles also hosted RDV 2017 in collaboration with Destination Sept-Îles and Tourisme Sept-Îles. Over 15,000 people came down to the port on a beautiful sunny weekend to visit the magnificent tall ships and join in the fun.

In total, five separate cruise ships and seven tall ships, carrying some 8,000 passengers and crew members in all, were treated to the Sept-Îles experience. The visitors came mostly from the U.K. (75%), the United States (20%), Australia (2%), and Asia (2%). The extended tourist season was a boon for local attractions and excursion companies like Musée régional de la Côte-Nord, the Vieux-Poste, Musée Shaputuan, Boutique Agara, and Croisières du Capitaine.

The 2017 season ended with a bang. Prompted by the newly lowered speed limit in the Gulf of St. Lawrence, the prestigious RMS Queen Mary 2 booked a stopover in Sept‑Îles with only two weeks’ advance notice. The entire community jumped into action to welcome the surprise visitors. In an eloquent demonstration of skill and determination, every player in Sept‑Îles’s tourism industry rose to the stopover city’s biggest challenge to date.

Over 80% of the passengers and crew members onboard the colossal ship came ashore to enjoy the many excursions and activities on offer. The cruise ship passengers were particularly won over by the throng of locals who gathered on the dock to welcome them as they arrived. The passengers left with a smile on their face and a tale to tell of the fabulous hospitality in Sept‑Îles—a coup that is sure to boost the city’s reputation abroad! In what was, for many, the highlight of the day, famous navigator Mylène Paquette was on hand in Sept‑Îles for a historic reunion between her boat, the Hermel, and the RMS Queen Mary 2, four years after they first crossed paths in the middle of the Atlantic Ocean.

The intrepid ocean rower gave a moving talk onboard the ship in front of a crowd of over 500 passengers and spent the entire afternoon mingling with locals and cruise ship passengers at the Sept-Îles marina—the Hermel’s home port. Ms. Paquette hopes to be on hand for subsequent visits of the RMS Queen Mary 2 to Sept-Îles; a first is already scheduled for September 28, 2018.

“Everyone sprang into action for the Queen Mary 2’s unexpected visit,” said Port of Sept-Îles, president and CEO Pierre D. Gagnon. “It’s the kind of community where people roll up their sleeves and get right to work. We rose to the challenge and created some truly memorable moments. The people of Sept‑Îles are famous for their hospitality and this was no exception. We’d like to thank everyone, near and far, who contributed their time, their services, their equipment…. Everyone really went above and beyond and made the day a huge success. The cruise industry provides an incredible opportunity for the community to come together and promote this beautiful region and the warmth and spirit of the people who live here.”

THE END OF A STAND‑OUT SEASON

Together with its partners, Destination Sept-Îles Nakauinanu (DSIN) is already planning for the 2018 season, which should see a significant increase in cruise ship stopovers. Building on the growth plan adopted at the start of the year, DSIN expects to double the number of passengers and crew members welcomed to the shores of Sept‑Îles in a single season next year.

Destination Sept-Îles Nakauinanu is a nonprofit organization whose mission is to promote Sept‑Îles as a stopover tourist destination with international cruise lines.