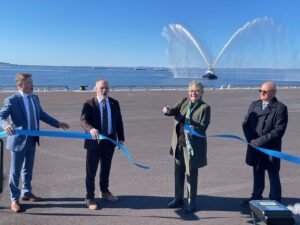 SEPT-ÎLES, October 25, 2021 – Two ministers were at the Port of Sept-Îles today to announce the new maritime infrastructure investment program for the Quebec government’s Advantage St. Lawrence vision: Chantal Rouleau, Minister for Transport and Minister Responsible for the Metropolis and the Montréal Region, and Jonatan Julien, Minister of Energy and Natural Resources and Minister Responsible for the Côte-Nord Region. The ministers also attended a ribbon cutting ceremony to celebrate the completed refurbishment of the Pointe-aux-Basques terminal, which serves as an inland gateway and supply hub for isolated villages on the Lower North Shore.

The $20 million project was awarded to LFG Construction in May 2020 and financed in equal parts by the federal government’s National Trade Corridors Fund (NTCF), Ministère des Transports du Québec’s maritime transport infrastructure investment support program, and the Port of Sept-Îles. It was delivered in September 2021, on time and on budget. It took over 150 workers at the height of construction to build a high-quality structure that is now better equipped for maritime and intermodal transportation, as well as climate change.

Speaking on behalf of the greater maritime region of Port Cartier and Sept Îles at the announcement that preceded the brief ceremony, the Port thanked the Government of Quebec for choosing to unveil its new Advantage St. Lawrence vision at the Port of Sept Îles, a maritime hub for major shippers such as IOC Rio Tinto, ArcelorMittal, Aluminerie Alouette, and Quebec Iron Ore and the biggest port at the mouth of the St. Lawrence River. With the combined volumes of the Port of Sept Îles and ArcelorMittal’s biggest private port in Canada standing at nearly 80 million tonnes, the tonnage that transits through the region is twice as great as the tonnage shipped through the St. Lawrence Seaway to the Great Lakes.

Said Pierre Gagnon, President and Chief Executive Officer of the Port of Sept-Îles, “The reopening of the Pointe aux Basques terminal during Maritime Employment Week, which promotes maritime professions at sea and on land, is extremely timely. This intermodal facility is an excellent alternative for sustainable transportation in the region and a logical and convenient bypass for the heavy road traffic on Route 138.”

“I am honoured to be in Sept-Îles to inaugurate the Pointe aux Basques terminal and announce that my government has earmarked $100 million to modernize the province’s maritime infrastructure,” said Chantal Rouleau, Minister for Transport and Minister Responsible for the Metropolis and the Montréal Region. “This terminal is a perfect example of the type of projects that we want to support as part of the Advantage St. Lawrence vision. Proper infrastructure will make our ports more competitive and bring greater prosperity along the St. Lawrence River.”

Boasting diverse, state-of-the-art facilities, the Port of Sept-Îles is one of North America’s largest ore-handling ports, with a projected volume of nearly 40 million tonnes for 2022. The port facilities at Sept-Îles play a vital and strategic role in the economy of Eastern Canada. The Port of Sept-Îles established the first environmental observatory in the St. Lawrence marine ecosystem. Sustainable development is a cornerstone of its values and actions. 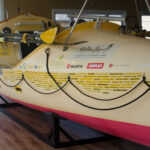 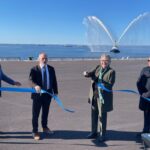