SEPT-ÎLES, January 27, 2016 – The Port of Sept-Îles has reached an agreement, subject to judicial approval, regarding its acquisition of land in the Pointe-Noire area. The land is currently subject to proceedings initiated by Wabush Iron Co. and Wabush Resources Inc. under the Creditors Arrangement Act.

The motion hearing for a transaction that would see certain Pointe-Noire assets sold to Investissement Québec has already been set for February 1. The motion will be amended so that the Port’s intended acquisition of land in the Pointe‑Noire area can be approved during the hearing. For more details on the upcoming transaction with the Port, visit the auditor’s website at http://cfcanada.fticonsulting.com/bloomlake/. 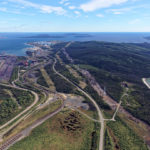