SEPT-ÎLES, November 21, 2011 – Green Marine is pleased to announce that the terminals owned by the Iron Ore Company of Canada (IOC), Cliffs Natural Resources–Eastern Canada, Pointe-Noire division, and Esso have joined its environmental program, while Aluminerie Alouette is also becoming a member in the “partner” category.

This makes the Sept-Îles Port Authority (SIPA) the first port in North America with all its partners, including terminals and users, participating in the Green Marine environmental program. Green Marine is a voluntary environmental program for the Canadian and American marine industry with over 140 members, including over 60 participants (ship owners, ports, terminals, and shipyards).

The close working relationships between the various Port users were instrumental in getting all the key players on board for this sustainable development initiative. In embracing Green Marine, these organizations are following the lead of the Sept-Îles Port Authority, Logistec Stevedoring Inc., Porlier Express, Groupe Desgagnés, Ocean Group, and the City of Sept-Îles. Several ship owners active in Sept-Îles, including CSL Group, Cogema, McKeil Marine, and Fednav are also Green Marine members.

The Port of Sept-Îles has a long track record on sustainable development. It worked with the St. Lawrence Economic Development Council (SODES) to draft the environmental policy that led to the creation of Green Marine. “The Port of Sept-Îles has always cared deeply for the environment, and considers the environmental implications at the outset of major developments projects,” said Pierre D. Gagnon, President and CEO of the Sept-Îles Port Authority. “Convincing all Port users to join Green Marine shows that the whole marine industry is on the same page and committed to working together to continue improving and to achieve environmental excellence,” he added.

Green Marine’s executive director David Bolduc notes that applying the environmental program to every sphere of its operations shows the Port is serious about sustainable development. “We congratulate our new members for making this commitment to the environment, and applaud the Port of Sept-Îles for taking the lead and rallying the troops,” he says. “Bringing in new members strengthens Green Marine’s environmental program and allows us to forge ahead with our goal to reduce the marine industry’s environmental footprint.”

About the Port of Sept-Îles
The Port of Sept-Îles is Canada’s leading iron ore port. It is open year-round and blessed with deep waters and a semi-circular bay around 10 km in diameter. With 13 docks, of which it owns 8, the Port handles an annual volume of close to 30 million tons of freight—mainly iron ore, alumina, aluminum, petroleum coke, limestone, and petroleum products. A strategic location at the intersection of major shipping routes between North America, Europe, and Asia, along with convenient year-round access to the St. Lawrence Seaway, have helped make the Port one of Canada’s largest in terms of volume. It also services one of the St. Lawrence’s top industrial hubs with innovative short-sea shipping services such as barge transport for aluminum and a railcar ferry for rail cargo.

IOC
IOC is a leading Canadian producer of iron ore concentrate and iron ore pellets serving customers worldwide. The company operates a mine, concentrator and a pelletizing plant in Labrador City, Newfoundland and Labrador, as well as port facilities located in Sept-Îles. It also operates a 418-kilometer railroad that links the mine to the port. IOC has 2,200 employees and its major shareholder and operator is the international mining group Rio Tinto, which has activities in more than 40 countries throughout the world.

Aluminerie Alouette
Founded in 1992, Aluminerie Alouette is an independent aluminum producer. With 1,000 employees and an annual production of 575,000 tons, it is the number one employer in Sept-Îles and the biggest aluminum smelter in North America. The Sept-Îles plant is the world leader for energy consumption per ton of aluminum produced and a state-of-the-art facility that largely exceeds government environmental standards. 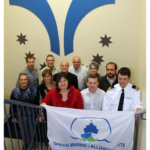