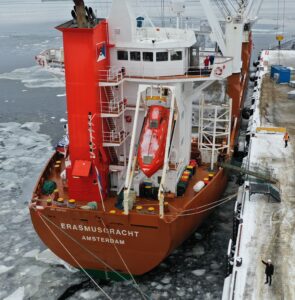 SEPT-ÎLES, January 5, 2021 – Flying the flag of the Netherlands, the M/V Erasmusgracht arriving from Lake Charles, Louisiana, was the first ship of 2021, with arrival at 3:30 p.m. on January 2. The ship was in ballast and will be leaving today for Barranquilla, Colombia with a cargo of 10,500 tonnes of aluminum sows from Alouette. Owned by Spliethoff, the ship has a crew of 13 sailors on board.

Due to the health restrictions in effect with the COVID-19 pandemic, the prestigious cane bearing the image of the Port of Sept-Îles was given to Captain Jaap de Boon by Fundy Shipping’s shipping agent. The traditional New Year ceremony at the Port, where the maritime industry and the Sept-Îles business community usually gather to mark the first ship, could not take place due to the pandemic.

Now in its 34th year, the tradition marks the arrival of the first ship of the year to call at the port. To be eligible, the vessel must come directly from a foreign country and be bound for a foreign destination.

The Port would like to take the opportunity to unveil the preliminary results for the year. Despite an unusual year with the Covid-19 pandemic, 2020 will be the second-best year in terms of tonnage since 1974, and the best year since the creation of the Port Authority in 1999, with 33.1 million metric tonnes handled.

REGARDING THE PORT OF SEPT-ÎLES CANE

Let us recall that it was on the occasion of the 25th anniversary of the award in 2012 that the traditional gold-headed cane was specially revamped to now present a more contemporary version of this coveted international maritime award. Since then, through the selection of its various components and its renewed design, it has honoured and enhanced the pillars of the region’s industries which operate through port infrastructures. Inspired by a 3D version of the Port of Sept-Îles logo, this new edition of the polished and anodized aluminum cane is stylishly reminiscent of the blue highway. The redesigned pommel supports an iron ore rock whose lustre is reflected in an acrylic hemisphere. The distinctive component of gold has not been overlooked in the new concept of the trophy. The seven stars illustrated on the logo of the Port of Sept-Îles and recalling the seven islands in the bay have been reproduced in 10-karat gold on the ring of the cane.

REGARDING THE PORT OF SEPT-ÎLES

Boasting diverse, state-of-the-art facilities, the Port of Sept-Îles is North America’s largest ore-handling port, with an anticipated volume of close to 38 million tonnes for 2021. It is also recognized as the most important port terminal for the primary aluminum industry in the Americas for its volume of activity. The port facilities at Sept-Îles play a vital and strategic role in the economy of Eastern Canada. The Port is also deeply committed to sustainable development, pioneering the first environmental observatory on the St. Lawrence to monitor the maritime ecosystem.