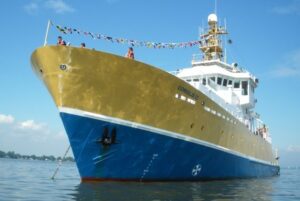 Sept-Îles, September 22, 2020 – The Centre for Industrial Port Expertise (CEIP), a division of the Northern Institute for Research in Environment and Occupational Health and Safety (INREST), and the Port of Sept-Îles are proud to welcome the research vessel Coriolis II. The floating laboratory is carrying a summer oceanography mission dedicated to collecting advanced data on the St. Lawrence River ecosystem as part of the Odyssée Saint-Laurent research program. INREST and its CEIP division are pleased to be partnering with the Quebec Maritime Network (RQM) on another Odyssée Saint-Laurent mission.

From September 13 to 28, a multidisciplinary team of scientists on board the Coriolis II will take samples and analyze data from the Gulf of St. Lawrence and the estuary for dozens of research projects piloted by six different institutions in the province. Special attention will be paid to the physicochemical conditions in the Sept-Îles, Port-Cartier, and Baie-Comeau industrial port zones. The data collected will further the work already being done by the Sept-Îles Observatory and be used to establish an environmental baseline for the Baie Comeau and Port Cartier industrial port zones.<

One of the members of the scientific crew is Viridiana Jimenez, assistant director of the Centre for Industrial Port Expertise (CEIP, a division of INREST). Jiminez will handle sampling and data collection for the industrial port zones and assist the other research teams on board the vessel.

“This is the second time INREST has participated in an Odyssey mission. It gives us the opportunity to forge solid ties with both RQM and the research teams on board during the missions, who benefit from Ms. Jimenez’s support and advice,” said Marie-Pier St-Onge, mission leader and scientific mission coordinator for the Quebec Maritime Network.

“CEIP was just launched in July and already it’s joining RQM’s Odyssey mission and contributing to the environmental monitoring being done for our precious bay ecosystem in Sept-Îles. We’re pleased and proud that this leadership is also going to benefit our neighbouring port zones, and wish all the research teams on board the Coriolis II a highly productive mission,” said Pierre D. Gagnon, president and chief executive officer of the Port of Sept-Îles.

By partnering with the research teams involved in the winter missions (on board the Amundsen in March 2020) and summer missions (on board the Lampsilis in summer 2020) and in September 2020 (on board the Coriolis II), INREST and CEIP are supporting data collection in Québec’s industrial port zones. The data acquired by CEIP through its partnership with RQM will be used for environmental monitoring and to implement the Enviro-Actions management model in the Sept-Îles port zone. The knowledge acquired by the CEIP team will also be shared with other port zones,” said Julie Carrière, executive director of INREST.

The mission on board the Coriolis II ends September 28.

About INREST/CEIP
The Northern Institute for Research in Environment and Occupational Health and Safety (INREST) is a non-profit organization investigating environmental and occupational health issues. INREST is internationally recognized for its industrial-port-area environmental monitoring station for marine ecosystem conservation—Quebec’s biggest—and the Centre for Industrial Port Expertise. CEIP is a division of INREST. Its flagship project is dedicated to protecting and preserving industrial zone and port zone ecosystems throughout the province by creating environmental observatories, deploying instruments throughout maritime Quebec, and using them to collect real-time data as per the Enviro-Actions management model, among other things.

About the Port of Sept-Îles
The Port of Sept-Îles is North America’s largest ore-handling port, with state-of-the-art facilities and a projected volume of just under 35 million tonnes in 2020. Its marine ecosystem observatory makes it a pioneer on the St. Lawrence Seaway and reflects the Port’s commitment to sustainability.

About the Quebec Maritime Network
Implemented in 2016, the Quebec Maritime Network (RQM) is a network of 166 institutions whose members include all Quebec universities as well as cégeps, college centres for technology transfer, research centres, public and semipublic organizations, community organizations, and companies in the maritime industry. It is hosted and managed by UQAR and is tasked with making the province a world leader in sustainable maritime development. RQM’s funding partners are Quebec’s Ministère de l’Économie et de l’Innovation and Fonds de recherche du Québec.

About Odyssée Saint-Laurent
Odyssée Saint-Laurent is an ambitious research program run by the Quebec Maritime Network. It is structured around three themes—Discovery, Applications, and Open Innovation—and receives $15 million in funding from Ministère de l’Économie de l’Innovation du Québec. The aim of the program is to add to our knowledge of St. Lawrence ecosystems, specifically their biodiversity and the environmental stress factors affecting them, and to develop tools, technologies, and new practices in sustainable maritime development.