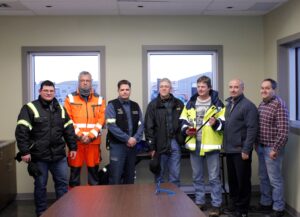 Sailing under Netherlands flag, the M/V SPAARNEGRACHT, was the first ship of the year to call Sept-Îles, arriving from Savannah, USA, at 9:47 a.m. on Sunday, January 3, 2016. The vessel arrived in ballast and will set sail today at noon, for Baltimore, USA, laden with a cargo of 10,000 tons of aluminum from Aluminerie Alouette.

The prestigious Cane bearing the Port of Sept-Îles’ insignia was presented yesterday afternoon at the La Relance terminal to Captain Hajo Y. van Losenoord, by Mr. Raynald Ouellet, Vice-president, Operations and Business Development of the Port of Sept-Îles, while accompanied by Mr. Jean-Pierre Castilloux of Aluminerie Alouette and representatives of Logistec Stevedoring and the vessel’s owners Spliethoff.

This tradition, now in its 29th year, marks the beginning of a new year of port activities, with a special ceremony for the arrival of the first ship of the year to call the Port. To be eligible, the vessel must come directly from a foreign port and be bound for a destination outside the Country without making any other calls at a Canadian Port.

ABOUT THE PRESTIGIOUS CANE

Since its transformation in 2012 with a renewed design, the new edition showcases the region’s industrial pillars that do business via the port infrastructures. Indeed, taking its inspiration from a 3D version of the Port of Sept-Îles’ logo, the new cane now includes aluminum in its composition and highlights an iron ore rock whose brilliance is reflected in a half sphere of acrylic.

The notion of gold has not been neglected in the new concept. The seven stars of the Port logo, which represent the seven islands in the Bay of Sept-Îles, were replicated in 10-carat gold to adorn the cane band, making it an exclusive and sought-after item for the maritime industry.

Boasting a variety of state-of-the-art facilities, the Port of Sept-Îles is one of North America’s leading iron ore ports. Sept-Îles’ port facilities play a vital and strategic role in the operation of a number of businesses from the region’s primary sector. The Port’s annual economic impact is estimated at nearly $1 billion, with some 4,000 direct and indirect jobs. Port activity at the Port of Sept-Îles therefore remains a significant source of wealth creation in Quebec and Canada.